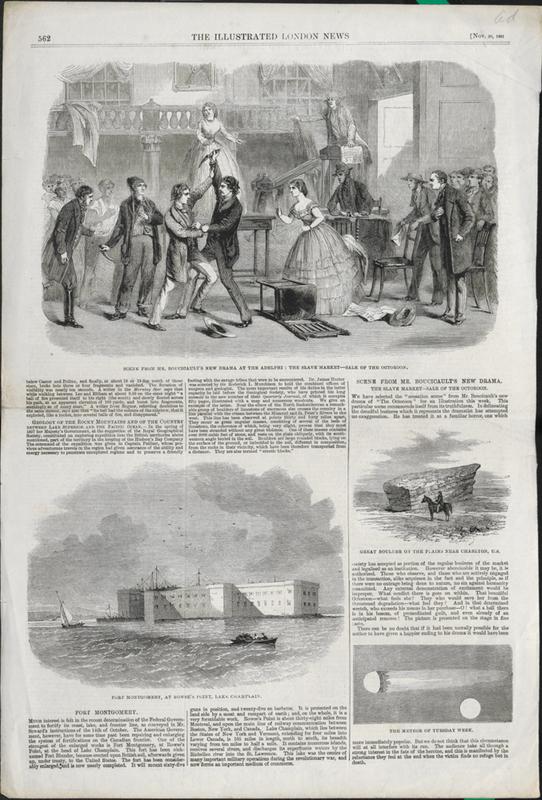 In November 1861, almost two years after its New York debut, the Boucicaults staged The Octoroon in London, England for the first time.  For several weeks the Boucicaults performed The Octoroon as it was staged in America, ending with the character Zoe committing suicide. But London audiences vocally expressed their disapproval at the protracted and graphic death of the heroine. Slavery had been abolished in England since 1807, although slavery was still the law in much of the United States.  Explaining and contesting the United States’ anti-miscegenation policies, and the “one drop law” that identified persons as juridically “black” and therefore subject to possible enslavement, the London Saturday Review of November 21, 1861 explained to its British audience, “the law of Louisiana, that forbids an amiable young gentleman to marry a pretty young woman, merely because there is an infinitesimal drop of black blood in her veins” seemed “absurd to an Englishman. (“The Theatres,” Saturday Review (November 23, 1861), 538.).

Letters were written to Boucicault, and published in the British press, imploring him to re-write the ending and allow Zoe to survive, escape enslavement and the rapacious desire of the overseer, and marry her white suitor. At first Boucicault resisted, claiming that such a change would reflect a diminution of concern for enslaved women and destroy the artistry of his tragedy. Nevertheless, Boucicault swiftly adapted the play for London audiences, and within weeks produced a version that ended with the promise of George and Zoe united in matrimony, though no marriage is seen to take place on stage.

On the premiere of this London adaptation, the December 9, 1861 Adelphi playbill announced: “A New Last Act of the Drama, composed by the Public, and edited by the Author, will be represented on Monday night. He trusts that the audience will accept it as a very grateful tribute to their judgment and taste, which he should be the last to dispute.”

This first adapted script, where Zoe survived, has never been found.  As we have discovered, a further set of amendments to Boucicault's British version occurred by February 1862, when the play was printed in a form that conflated it to four acts with Zoe's presence relegated further to the background The British press satirized the chnaged ending with the poem "Saving the Octoroon."

Continue to: Performances at The Britannia