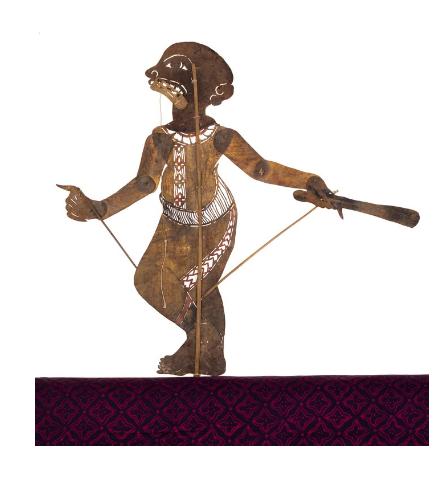 Chon is an unrefined male clown character, who is featured with a bald head and large ear. He is portrayed as wearing an elaborate upper garment that covers his chest. Both arms are articulated at the shoulder, elbow and wrist. The articulated arms are manipulated by a puppeteer via a bamboo rod attached by a knotted cord to the hand. The leather puppet is supported by a central bamboo rod that is tied to the leather figure via cording. He also features a hinged and articulated jaw with a bamboo hinge which can be moved via a fiber cord in order to enable the puppet to appear to speak. Dimensions: Height: 71.5cm Width: 24.3cm Width including extended articulated arms: 73.3cm

Made in Southern Thailand

dense uncolored hide that will cast an opaque black shadow