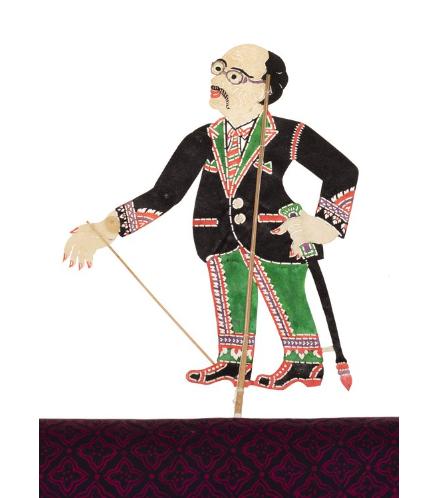 Shadow Puppet (Prime Minister), the puppet depicts the character of a wealthy leader in profile wearing a western suit and walking with a cane. Nang Talung often incorporates modern characters and styles of clothing into the design of its shadow puppets. One arm of the puppet is articulated at the shoulder, elbow and wrist. The articulated arm is manipulated by a puppeteer via a bamboo rod attached by a knotted cord to the hand. The leather puppet is supported by a central bamboo rod that is tied to the leather figure via cording. The leather is thin and translucent goatskin. The puppet has been dyed with vivid colors of pigment that permeate the leather and allow the bright colors of the clothing of the puppet to project through the shadow screen and provide a colorized shadow. Dimensions: Height: 54.5cm Width: 24.3cm Width including extended articulated arm: 44.5cm

Made in Southern Thailand