In other archives we have found evidence that The Octoroon appeared on the colonial stages of Australia a full ten months before it was staged in London and therefore before Boucicault changed the ending. Our exploration of the performance history of The Octoroon in Australia further illustrates the potential shifting meanings of racial categories and representations of enslavement in nations whose colonial histories were built upon differing constructions of racist oppression, genocide, and slavery. In America, racist beliefs led to hundreds of years of enslavement of African captives and their descendants; in Australia, such attitudes resulted more specifically in systematic genocide of the native population--though certainly forms of slavery existed. This was the immediate backdrop for the first Australian performances of The Octoroon. 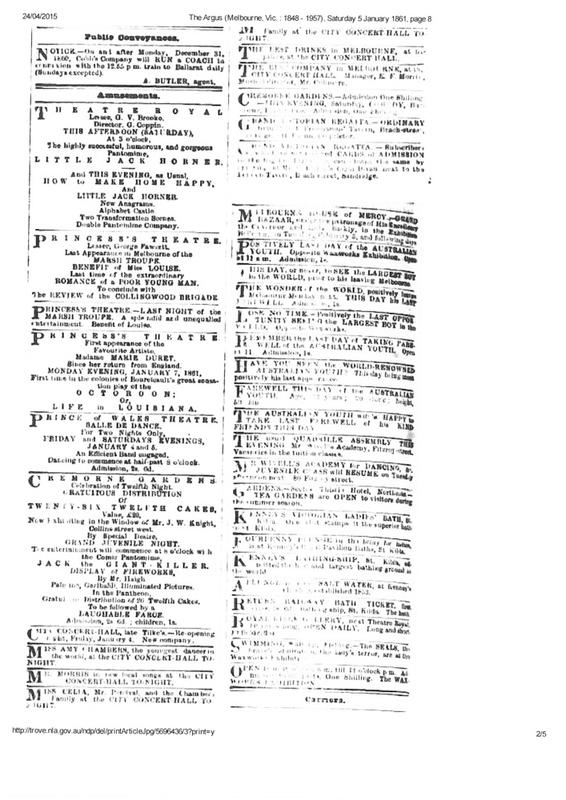 Advertisement for Performance at Princess Theatre in Melbourne 1861

The first performance of The Octoroon in Australia was advertised as the "[f]irst time in the colonies of Bourcicault's [sic] great sensation play"--was to take place on January 7, 1861, and featured British actress Madame Marie Duret as Zoe ("Amusements," Argus, Melbourne, January 5, 1861, 8.) Readers of the Melbourne Age were told that The Octoroon was a play of "thrilling interest" in which "the horrors of slavery are vividly brought out" ("The News of the Day," Age, Melbourne, January 8, 1861, 5).

Australian audiences were aware of the existence of slavery in the United States, and some apparently disapproved. As a reviewer in the Ballarat Star asserted, The Octoroon "illustrates the old story of the abominations of slavery” (Star, Ballarat, March 6, 1861, 3).

This review provided a detailed description of the plot, and noted the play culminated in the death of Zoe, as it had in the original American version. Thus, a range of Australian performances, staged immediately before the outbreak of the US Civil War and predating The Octoroon's debut in Britain provide a further window into the representations of American slavery on colonial stages.

Newspapers archives indicate that Marie Duret was most likely the first performer to bring The Octoroon to Australia, followed swiftly by American actor Charles Wheatleigh, who had been performing with Dion Boucicault in New York, and shortly afterwards by Joseph Jefferson, who starred in the original version of The Octoroon, in New York, as the affable and honorable comic character, Salem Scudder. 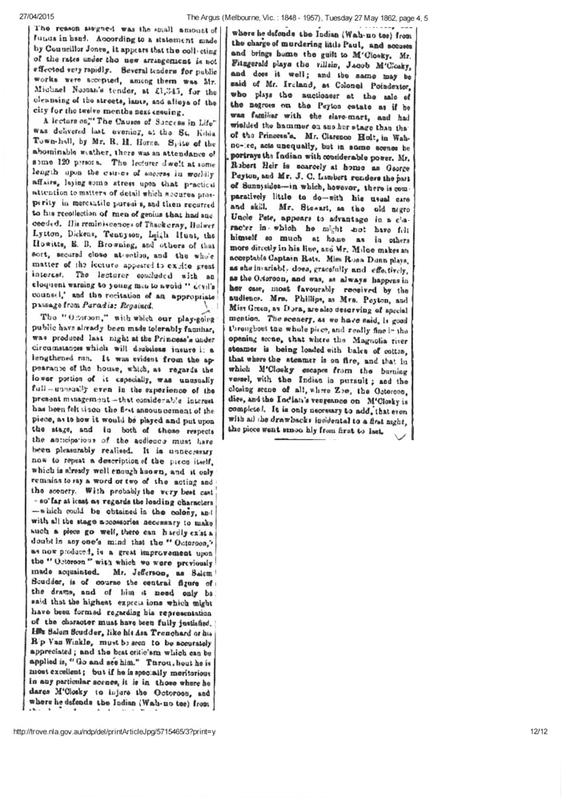 Review of Joseph Jefferson as Salem Scudder at Princess's Theatre in Melbourne Australia, 27 May 1862

The Australian public had "already been made tolerably familiar" with The Octoroon at the time of Jefferson's performance, according to the Argus, and the "anticipations of the audience" was "pleasurably realised" (Argus, Melbourne, May 27, 1862, 5). In addition to commending Jefferson's performance as Scudder and Rosa Dunn as Zoe, this reviewer singled out for commendation actor Mr Ireland's portrayal slave auctioneer Colonel Poindexter "as if he was familiar with the slave-mart, and had wielded the hammer on another stage than that of the Princess's." Newspaper reports indicate that the versions produced by Duret, Wheatleigh and Jefferson in Australia ended with Zoe's suicide just as it had done in the original Winter Garden production in New York, even after Boucicault had rewritten the ending for London audiences (this rewriting was reported in the press in Australia).

One of the Australian promptbooks we examined is listed as belonging to actor and stage manager James Stark. These promptbooks end with the death of the heroine. But the fifth act is a hand-written insertion, indicating that at other times and places other versions of the play may have been performed or considered. Stark's promptbook was most likely used during his 1868 tour of Australia. It is pasted into a copy of the four-act edition in which Zoe neither died, nor married George, but ended instead with the grand tableau, with Zoe in George's arms as the steamboat exploded.

The promptbooks and reviews we have discovered for Australian productions of The Octoroon provide further evidence that, as in the United States, the play concluded with the death of the enslaved heroine. In addition, many reviews in the Australian newspapers describe The Octoroon as a play having a plot already so familiar to audiences that it did not warrant retelling. Advertisements in Australia throughout the 1860s continued to bill The Octoroon as Boucicault's "great five-act drama." For all of these reasons we conclude that, in the 1860s, the original United States production was performed throughout Australia.

For some spectators in Britain, Zoe's rewritten "happy ending" served as a resolution of her plight, and a reification of British claims to moral superiority. But in both the United States, where millions of black women still were enslaved at the time of its debut, and in Australia, where the lives and humanity of indigenous women were threatened, the heroine's suicide largely was accepted and applauded as an appropriate, if necessary, conclusion to the melodrama.